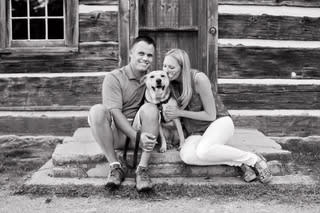 It was a day spent pacing, anxious, excited, and terrified - it was the day we were adding to our family. As new parents, we could barely contain our excitement - which made the fact that it was a huge secret even harder to keep…

Wait….Rewind (2 weeks prior): The day that “Maud’s” picture popped up on my FaceBook home page, was the day our lives changed forever. The second I saw her face was the second that I knew she was meant for us. In a matter of seconds, I had already sent her picture and received a response “we’ll talk about this later” - which considering the many other pictures and videos of dogs that had been sent with the standard response of “no” this was a good sign.That night after a lengthy discussion I sent in the adoption application. To anyone who didn’t know better, they would have thought we were applying to adopt a child. The waiting game was on. I don’t know if either of us slept until we got a message from the adoption coordinator requesting a phone meeting… then it only got worse - waiting for the home check, the meet and greet and then getting that long-awaited email saying “you have been approved!”

Fast Forward: We had kept the secret, no one knew. We had ‘baby’ shopped and set up ‘her room’ - and the workday could not end fast enough. We drove out to pick up “Maud.” She had already met us once and seemed to realize something was happening, but she was still nervous. After many tears on all sides, she hopped into our car and began our drive home. We had only made it a few blocks before I made him pull over so I could get into the back seat with her for the rest of the drive. After the first few days, she seemed to recognize that she was home to stay. We knew the exact time she realized it too - it was about 3 weeks after bringing her home, and we were watching TV in bed. We had said our goodnights, and she went to her bed. The next thing we knew she jumped up and gave us a look like, “guys I’m not done with you yet.” This officially began our nightly snuggles before she went to her own bed for the rest of the night. She instantly became our world. We had changed her name to Lucy (because everyone loves Lucy), and she started her new career - office dog/travel companion/daddy’s girl. She also very quickly became a Gramma’s girl.

Time Jump 3 years: With Lucy’s anniversary coming up, it's bittersweet looking back on her time with us. On one hand, she is the reason we get up every day, we plan our day around her and give her everything she needs and then some. And on the other hand, it’s hard to think about what her life was like before she was rescued from Kentucky, or even prior to receiving the surgery she needed to live a pain-free life. We often talk about wishing we knew what her previous life was like, to help us better understand some of the quirks she has (one day, she will swim, we have faith), but at the same time, we know that knowing what she went through in her first 3 years of life could be hard to hear. Lucy lives every second of her life getting the best of everything. We talk about her as if she is our child, and many people don’t realize she is a dog until told. She has all the perks of being our child - her own queen size bed, her own bedroom at Gramma’s, the mood swings a teenage girl goes through when she doesn’t get her way, and the tears a toddler gets when Daddy has to go away for a few days. She starts every day with good morning kisses and ends every night in bed with us - since she has now decided that she can’t sleep alone anymore. She even got her first sleepover this past summer when we were out of town for a wedding - a whole week. After making a HUGE scene at the airport and strangers telling me it was going to be okay leaving my ‘daughter’ for a week, and assuring me that she is in good hands with my mother, while my fiancé stood there mortified that I was this upset about leaving her, only to come home to find out that Lucy had decided that she was never coming home and that Grammas are way more awesome than mommies. We quickly learned where we fell on the Lucy scale of love - Gramma first, daddy second, mummy is a hard last…. but never the less, the dog is still spoiled. I also discovered that when you leave a dog in the care of my mother, my father gets banished to the boat or to my childhood bedroom so the dog can sleep with Gramma, and she learns to wear a hat to protect her face from the sun while she chases the squirrels. Looking back, it’s hard to imagine a time without her. If she isn’t in the house, our house seems empty and lonely. She brings joy to everyone she meets, (if you are the mailman a little bit of fear….unless, of course, you have a BarkBox in hand….)

"Rescuing her was the best decision of our lives; she has altered it in so many ways, we could never go back."